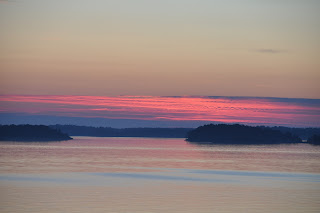 Some amber marinated in tobacco oil, with coconutty leathery, almost medical notes surrounded by a wiff of menthol. The opening of Michigan self learned perfumer John Peggs Copper Skies is brutal and almost exaggerated, the impression is as the fragrance is blended in an old oil drum in the perfumers garage. This perfectly fits the image of John Pegg, the former automobile worker, now devoted to perfume creation for his own line of Kerosene. The leather – coconut note in Copper Skies reminds me of an accord in ELDO Rien and/or Tom of Finland, as I remember this is present in both these fragrances, with a rougher edge in Rien and smoother in Tom of Finland. Mr Parfumista also smells a dark lavendelnote maybe a concentrated lavendeloil smells like this.

As Copper Skies calms down in the middlenotes, the amber becomes more apparent, and the blend becomes smoother and appears as a contemporary (not classic) amber surrounded by smooth and moderatly sweet honey accentuated with spices and cloves. There is no for the amber genre typical vanillanote, for example in By Kilian Amber Oud, something that differs Copper Skies from a lot off classical ambers. There is neither the obvious herbal ackord, typical for the more masculine ambers in the style of MPG  Ambre Precieux  and HdP Ambre 114. During the dry down Mr Parfumista smells traces of the note of silver polish present in Annick Goutal Vetiver and also some of the darker elements from Sables. As Copper Skies reaches the basenotes something unusual happening, it’s as the fragrance retakes, the amber/tobacco/clove accord becomes more intense and also whiffs of the menthol note appears again.

Copper Skies is a rough and tough fragrance, far from fine “haute couture perfumery”. There is a more or less muted ELDO-vibe during the whole developement of Copper Skies. But as mentioned above, some Goutals are also present and maybe there is a part of the secret of the Copper Skies sucess: Each wearer can recognise some of his/hers favoritescents.  Copper Skies also mediates a somehow homemade impression but in a positive, relieving way. The only thing that annoys me with Copper Skies and which lower its rating, is the feeling that the components doesn't blend together enough. It's like the perfumer has trown in different comfortable fragrances but haven't mixed them properly together and they are existing side by side/as followers of each other. On the other hand this gives the fragrance a own identity and as the same pattern is recognizable also in Kerosenes green creation Creature, this is mabye the characteristic mark of the Kerosenebrand.

Copper Skies is werable the year around, as it lacks the vanilla sweetness it’s also suitable for summer. Of course, as it name indicates, it’s a perfect late autumn scent, when the leaves has fallen from the trees, lying sparkling of yellow, orange and red of the ground, the air is chilly and the orange, blue, grey clouds chases across the sky. The longevity of Copper Skies is amazing 24+ , the blend is strong, heavy application is prohibited J . The development of the fragrance is interesting, the least interesting part is the middlenotes, but this is offset of the cozy feeling that this stage mediates, this is a constant wrist-sniffing stage. I’m sure Copper Skies will be a comfortable fragrance (despite it’s brutal start) to fall back upon days when I don’t know what to wear during the colder months. Copper Skies is truly unisex, even the picky Mr Parfumista sneaks from this and as there is very few new releases that please him nowadays, this is a high mark for Copper Skies. I rarely blindbuying frags, but in this case I'm glad I did it, despite it seems as Mr Parfumista has taken over the bottle :-)

Writing about the bottle: The eccentric bottle coated with car paint and the copperlabel is handpainted/ decorated by Mr Pegg himself.

Update autumn 2012: Mr Parfumista has taken over the bottle for real and Copper Skies has fast advanced to one of his most preferred fragrances.
Upplagd av Parfumista kl. 06:00

Lägg till kommentar
Läs in mer...